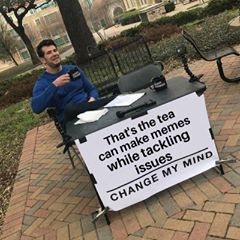 We love memes. I mean, who doesn’t right? If you are anything like me, you must be spending most of your day scrolling through dozens of memes, sharing them to your friends and commenting stuff like ‘lol I’m ded’ or ‘relatable lmao’.

I never estimated the true essence of memes before the pandemic hit, after which I was forced to go through them for long durations throughout the days. That is the exact time period when most companies – Indian and foreign – relied on memes to interest people into their products. The companies have realized is neither – quality or service that interests people to them. A whole generation, basically feeding on memes, has got to be attracted to a certain destination online by a ‘relatable lmao’ meme then, right? Right.

If you, like me, suddenly notice various firms had started suddenly relying on memes to advertise. With the pandemic cutting down on everything from mankind to labour, memes suddenly seemed a convenient way to both, advertise their best products and reach out to a large, collective audience. They only needed a social media account and some creativity to become known. While this may seem like a bad thing, with memes replacing labour (for advertising only. I hope), it actually has a tremendous plus-point. The whole nation has had the question ‘What kind of jobs will the next generation have?’ for quite some time now. A whole generation – with immense meme knowledge. That takes care of advertising jobs, social media handling and most creative jobs. In fact, the way things are going, I expect there to be special Meme-Advertising jobs coming up in the near future, where one might even get paid to make memes for a certain firm

Meme marketing has become a thing and with the pandemic and quarantine, people have realised how vital and resourceful having such a job is. Companies like Tinder, Disney+ Hotstar, Alt Balaji and other OTTs already were garnering interest with memes. Several other big names like Prime Video and Brandfactory even held meme competitions throughout the lockdown which allowed anyone to submit memes advertising their brand or products and giving the best ones a cash prize.

Several celebrities have earned their way into the meme Hall of Fame, which has lead people to trace the origin of the reactions or stills, which lead to movies, TV shows and Web Series, giving them , their staff and cast huge audience ratings, boosting their income. For example, a popular Leonardo di Caprio picture became a meme and people used it like wildfire. You may or may not be familiar (you will be, otherwise you have been living under a rock) with this template –

This still is from a scene from a movie titled Django: Unchained, which explained the story of the black slaves in America from back in the day. The movie came out in 2012 and the lockdown allowed people allowed people to watch it. This lead the cast and the staff to earn huge viewership bonuses, while also learning about the slaves’ situation back in the day.

I expected most of you here to click on the article expecting to see some great ‘lol I’m ded’ memes; unfortunately I’m just explaining their sudden growth and what you should expect in the future. Drake’s popular song ‘Hotline Bling’ still gets in views because of his many meme-worthy reactions, earning him and all of his staff.

There are several meme pages on social media that already earn making memes, motivating several others to pursue meme-making as an entire career! While it may seem nice and enjoyable to have as a career, the kind of competition there is, just to make memes is staggering, with a survey counting over a million pages dedicated in making memes on Instagram, alone!

Eventually, we might have to wait and see how important memes do become in the future, but looking at how the ‘Meme Industry’ is booming worldwide, with several Indian brands like Big Bazaar also using memes to advertise, it seems almost impossible that memes don’t play a bigger, more important role in the future.

Whatever the scenario, I, already have started practising the art by making them for entertainment purposes, hopefully earning from them in the future. Warning – I’m really good.

2 thoughts on “Why Memes Are the Future of Every Industry”