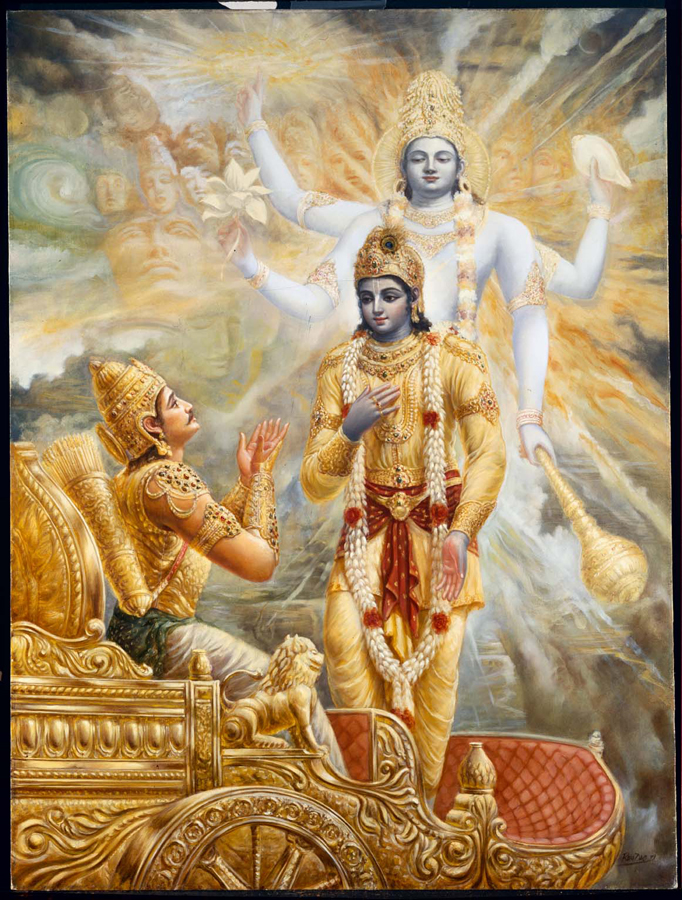 Translations of the above lines are: I offer my prayers to Goddess Saraswati who grants the means of communication and to Lord Ganesha who is the source of all knowledge. Both knowledge and speech are crucial when we are trying to summarize divine philosophies like the Gita, hence their blessings are important. Even Ramcharitmanas written by Tulsidas in 1633 starts in a similar fashion.

The narration of the Gita takes place on the battlefield of Kurukshetra, present in the modern-day Haryana, India. The story of the Gita has its foundation in the epic Mahabharata; hence for understanding the story of the Gita we need to understand the Mahabharata. This is a summary of the 18 chaptered epic; Pandavs and Kauravs are first cousins belonging to Kuru clan who ruled over Hastinapur. The Pandavas were the rightful heir of the throne but they were denied their kingdom. Then events such as public disrobing of Draupadi (the common wife of the Pandavas), sending of Pandavas to exile, public humiliation of the Pandavas and denial of their birthright led to the war of Kurukshetra. The Kauravs soaked in adhrama, are hungry for power. On the other hand, the Pandavas uphold dharma hence they are supported by Shri Krishna.

Chapter १ : When he doesn’t judge then why do we?

The Bhagavad Gita means God’s song and as we know a song or poem can have multiple meanings, according to the reader . The way I comprehend things won’t be the same as you comprehend them. We both observe the world differently. To show the importance of perception and observation the first chapter of the Gita is based on darshan or observation. How we perceive the Gita, it will benefit us in the same fashion. One whole chapter is dedicated to just questions asked by Arjun, Duryodhan and Dhritrastra, this show us the importance of asking questions.

The first lines of the Gita are spoken by Dhritrashtra, the blind father of the Kauravs and these are the only lines he says. This shows that before reading the Gita we are blind like Dhritarashtra limited by manmade boundaries. But then as we read the Gita we lose this blindness and see the set cosmic stage of Krishna.

The first chapter talks about all the armies assembling on the battlefield of Kurukshetra. It shows how Arjun, Duryodhan and Dhritrastra view the same battlefield. Dhristratra views the battlefield as the dharma-kshetra, thinking whether this battle and his decisions are correct or not. Duryodhan views the battlefield and becomes insecure, agitated and irritated and asks his teacher Drona whether his side is as strong as that of the Pandavas. Even though he has 11 armies, 4 more than that of the Pandavas but still he feels insecure. Then Arjun views the battlefields and sees his brothers, uncles and teachers ready for quenching the thirst of Earth with the blood and that too for a piece of land. Arjuna feels that killing of his family members whom he should protect and worship is wrong. He becomes anxious, his throat dries up, his bow the Gandiva slips from his hand and the weeping Arjuna falls on the seat of his golden chariot.

The Philosophy: The Essence of Darshan

All three people who view the battlefield are looking with their eyes and just comprehending what they see. Duryodhan views the Pandavas as their enemy; Dhritrastra views Kauravas as his children but considers his nephews the Pandavas as intruders and Arjuna views his enemies as his relatives. All three men observe and divide the battlefield based on the boundaries created by them. That’s what we do, we make boundaries. Based on these boundaries we judge others and this leads to the division of society. The meaning of boundary is to create limitation and with these limitations how can we understand the limitless.

In true darshan or observation, there is no judgment because there are no boundaries, no rules and no separation between right and wrong, mine and yours. When we see everyone without judgment then we can learn to love, which is the foundation of human dharma. Here Krishna does darshan, he does not see the Pandavas as the victims or the Kauravas as the oppressor he doesn’t judge. This principle of darshan is very evident in the Hindu mythology; unlike the western philosophies, we don’t have the concept of judgment day or Qayamat ka din because the Hindu gods don’t judge. Even in the Gita, Krishna only explains the architecture of the world. When we judge we lose our ability to see the bigger picture, we get lost in the artificial boundaries. Hence we should see the world without judgment and open ourselves to love.

My favourite verse from chapter 1:

O Janardana (Shri Krishna), although these men, their hearts overtaken by greed, see no fault in killing one’s family or quarrelling with friends, why should we, who can see the crime in destroying the family, engage in these acts of sin

* Taken from Bhagavad Gita As It Is by A.C. Bhaktivedanta Swami Prabhupada

These lines said by Arjuna make him a worthy recipient of the Gita. As we can see Arjuna sees the Kauravas not as his enemy but his brothers, hence he does darshan, even when he has many reasons not to.

Chapter २: You and I will die, but still remain immortal

As discussed in the previous chapter darshan is without any boundaries, without any man-made demarcations and limits. But in this chapter, we will do darshan beyond death, where boundary death, is also overcome. Death brings fear, it even alarms devas and asuras; so much that they tirelessly churned the ocean of milk (Samudra Manthan, Bhagvat Puran) to obtain the nectar of immortality. Fear gives rise to Matsya Nyaya where the stronger feeds on the weak. The dharma for humans is to rise above the Jungle law; this can be done by overcoming fear. To overcome this fear of death Shri Krishna reveals the knowledge of Atma and rebirth. Arjuna in tears calls Shri Krishna as Madhusudana. Madhusudana means the one who killed the demon Madhu. This is symbolic, Arjuna wants Shri Krishna to kill his demon of misunderstanding like the way he killed Madhu and establish dharma for him.

There is no major development in the story, Arjuna is still weeping in his chariot. But this time Shri Krishna speaks and the conversation officially starts now. Shockingly, the greatest warrior on Earth, Arjuna declares to Govind (Krishna) that he will not fight. Krishna then tries to motivate Arjuna to battle, but this doesn’t affect Arjuna soaked in grief. Arjuna then submits to Krishna, and then Govind delivers the knowledge about Atma and rebirth to Arjuna. Krishna becomes Guru or teacher to Arjuna, when Arjuna submits to Shri Krishna. Showing us the importance of a teacher in the life of a student. This is a recurring theme in Hindu lore, that a teacher has the same status as the Gods.

The Philosophy: Knowledge of Atma

Arjuna does darshan but his knowledge is limited by death and birth. Hence he feels killing his kin would be wrong. He believes birth is the beginning and death is the end. But darshan should be without any limits, hence comes the concept of the immortal Atma or dehi which resides in mortal flesh or deha. Krishna describes the Atma as indestructible, immeasurable and immortal. No weapon can harm it and it can’t be cut into pieces. This means that when a person dies, the mortal flesh remains and the immortal resident then takes up a new body. So does it mean that all the knowledge we are gaining now would remain with mortal flesh and in our rebirth do we start from square one? This is not the case, Gyan or knowledge is the quality of Atma hence it stays with the Atma, hence we say that some have talents from birth. But one may ask for how long this cycle of rebirth goes? This cycle of rebirth goes on until the Atma doesn’t have enough means of incorporating with the param-Atma or Krishna. The means of incorporating of Atma with param-Atma is through Gyan or knowledge which the Atma gains in every Janam or birth.

Without the concept of rebirth, we only see half the picture which is often misleading. The Earth from ground appears to be flat, but as we move above from the ground we see the entire picture and see the round Earth. The story of Karna from Mahabharat is a great example of rebirth. Karna struggles his whole life because of his lower social status. He is denied education, Pandavas make fun of him, Draupadi insults him in front of all royals and also he is killed in a way which is against the law of war. Overall he seems to be a victim. But when we see Karna’s previous life we see that he was an asura who caused a lot of destruction. Hence he is paying for his actions, hence he no longer seems to be the victim. Hence if we do darshan beyond the boundaries of birth and death we would see everyone the same and love everyone.

Now with the concept of rebirth and Atma, even death is declared irrelevant. This is because our birth is not our origin and death is not our end, but they are simply re-birth and re-death. Now even our greatest fear of death is no limitation in our darshan. Also, the chapter 2 sets up the stage for chapter 3: karma yoga by talking about we having power only to perform our prescribed duties, but we are not entitled to the fruits of our actions. And talking about yoga. Hence we should do actions without thinking about the fruits of our work.

Translation: Know the embodied soul to be a part of the hundredth part of the point of a hair divided a hundred times, and yet it is infinite.

Gita describes the Atma to be indestructible and also that the Atma has no birth and no death. As many believe that the Atma or dehi is a form of energy. And if we recall the first law of thermodynamics or the law of conservation of energy we know that energy neither can be created nor can be destroyed but only change from one form to another. So if we see Gita describes the law of conservation of energy way before Rudolf Clausius. Energy not being created nor being destroyed shows the immortality of the Atma and changing of energy from one form to other shows the process of rebirth where Atma leaves one body and attains a new one.

My favourite verse from chapter 2:

* Taken from Bhagavad Gita As It Is by A.C. Bhaktivedanta Swami Prabhupada

Anger is such a feeling which brings out our dark animal side. When we get angry then we lose our memory, due to which the memory of our relations and knowledge are lost. And without knowledge, we are simply animals and hence in anger behave like one.